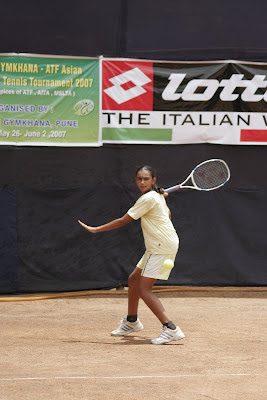 DECCAN: At the start of the main draw of PYC ATF Under-17 Series, conditions at the PYC Hindu Gymkhana and Deccan Gymkhana courts was gloomy as gray clouds were hovering around these venues. But, as luck would have it, for some players, their day was resplendent after staging a series of upsets against seeded-players. There were three upsets in the girl’s and one in the boy’s segment.

Carrying an injury on his shoulders from past four days, Adwait began his low-key campaign with forcing too many errors in the first set, as he was not getting his backhand, forehand cross-courts and serves properly. He shook his head with grimace and stared at his parents for guidance. Probably keeping these options aside was a better option for him to move on to capture the hearts of the people gathered to watch some good tennis.

Soon Adwait found his rhythm and bounced back in the game forcing his rival to battle it out for the first set in the tiebreaker. Adwait won 7-5 down under with an exquisite down-the-line shot leaving Rajat grunting to react for the ball.

The first-set win boosted Adwait’s confidence and he began playing aggressive tennis. As a result, Rajat gifted away the first three games through many unforced errors. This set up Adwait to clinch a victory with forehand return shot.

In the biggest upset of the day, Parminder trounced her Sri Lankan rival Sherene comfortably in straight sets. She had no difficulty in negotiating the top-seed. Though Sherene played a better game, inconsistency did her in.

“Until I won the match, I didn’t knew my opponent Rajat Solanki was a seeded player,” told Adwait Sadwilkar after registering a win in his first round of the main draw of the PYC ATF Under-14 Series on Monday. Speaking to Maharashtra Herald, he said it was not easy to clinch the first set. “I played cautiously after forcing lot many errors. I didn’t hit the ball hard to earn points,” he added. “My shoulder injury was bothering me and could not get my shots properly. But, I picked up my momentum after I put my match-worries behind,” he said. After pulling off the first set in the tie-breaker, I went on the rampage and played aggressively pushing Rajat on the backfoot, who committed lot of mistakes,” Adwait said.
Posted by B D Narayankar at Tuesday, May 29, 2007