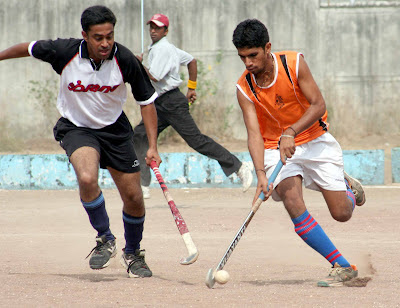 KHADKI: Green Meadows came from one goal down to draw the match against their rivals Metro XI in Rosary Education Group Nine-a-Side Hockey Tournament at Ammunition Factory Ground here on Tuesday.

Buoyed after a fabulous victory against Hockey Lovers last night, Metro XI stepped up their game nonchalantly. This approach, however, cost them as they had to be satisfied with sharing points with Green Meadows.

Things started to happen for Metro in the first half. They were brimming with confidence in the company of Pollaiah brothers – Rakesh and Sanjay – famous for their speed and dribbling skills.

In fact, Sanjay opened Metro’s account in the 14th minute when he swept the ball in after snaking through Green Meadows’ barricade.

Only two minutes into the second half, Green Meadows’ mid-fielder Shyam Sharma brought up a fantastic save blocking a cracking shot aimed at the goal by Sanjay.

In 28th minute, Green Meadows finally opened their score line through Shyam cracking a devastating shot on a beautiful Rishikesh Kulkarni’s pass from the right corner.

Green Meadows and Metro spurned a good number of chances to surge ahead. In the 30th minute, Mahesh Bhendwar of Green Meadows earned a penalty corner, but his teammates did not convert it due to clumsy stick work.

Soon after, Chenmay’s penalty corner hit was well blocked by a couple of Green Meadows’ defenders.

The last five minutes saw Green Meadows push forward and create some good attacking play. The attack style, however, did not pay off.

In yet another match, Vikram Pillay Academy drew with Central Railways 1-1. Goals for both the teams came in the second half after a boring first half’s match.

Asish Bhosale put Central Railways ahead in the 26th minute of the match. Four minutes hence, Vikram Pillay retaliated with vengence and scored the equaliser through Vikas Pillay.