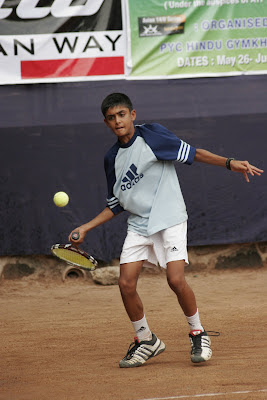 DECCAN: It was the day of honour for the city as two of its sons pulled off stunning victories against a couple of seeded players in the PYC ATF U-17 Series played at PYC Hindu Gymkhana here on Tuesday.

In the biggest upset of the day, Arjun Kadhe shattered top-seed J P Mohit Mayur’s dreams to qualify into tournament quarterfinals, thrashing him 6-3, 6-3 in straight sets. In yet another upset game, Aniruddha Darp streaked ahead fifth seed Sharan Patil of Bangalore 0-6, 6-3, 6-4. With these wins, both have entered the last eight stage.

Such was Arjun’s determination to win today that he told to his father-coach Jayant Kadhe that he would not prefer to sort out his technical mistakes on practice courts after losing to Mohit. Arjun began his campaign on a high note smashing backhand and forehand winners with great timing.

After winning the first set, Arjun had a tough time in the second set. From 1-3 down, he found his range to reel off the next five games as mistakes crept into Mohit’s game

Aniruddha, on other hand, had a great game, winning it from down under. He showed some character in putting his game on the track after he was routed in the first set 0-6.

Throwing this woeful memory into the shelves, Aniruddha implemented coach Hemant Bendre’s advise on rallying, instead pushing hard at the net. That worked as he forced Sharan to commit many unforced errors. A whipping crosscourt into Sharan’s back corner gave Aniruddha match point as the former netted a forehand. His win over Sharan confirmed his impressive recent form on clay.

While Aniruddha has a better chance to move into the last four since he would be taking on a relatively unknown Devpriya Jaiswal, Arjun has an arduous task of defeating second seed Ronit Bhist.

Arjun, however, can take umbrage under the fact that Ronit wobbles in crisis as his results of the last two games of the main draw suggests.

In the girl’s section, there were no upsets today. Parminder Kaur, who surprised many after beating top-seed Sri Lankan Sherene Wijwsinghia, sailed into quarterfinals, beating her opponent Samanauz Dhasti 6-2, 6-0.

“I lost the first set trying to hit winners. But in the second set, I regained confidence after toning down my game, concentrating more on rallying than power play,” he said.

“Sharan was striking the ball hard and playing well. I gained an upper hand by inducing him for long rallies and unforced errors,” Aniruddha said.

“I was neither cowed down by the fact that I was playing a seeded player. I don’t care who am I playing. I just go out and play my game,” he blurted.
Posted by B D Narayankar at Wednesday, May 30, 2007