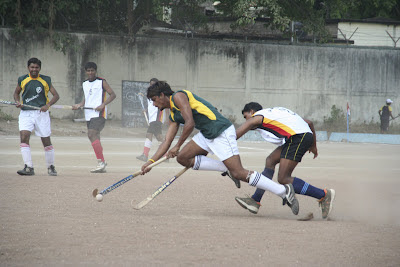 Commendable as the show of Poona Police was before the motley crowd, the fact that Rakshak Sports could not utilize its strength to give a fight to their opponents must be flayed.

Poona Police created some openings thanks to quick sallies of their frontline players who grabbed the opportunity to score when the ball was there to hit.

Mark Anthony made a brilliant move into the opponent’s D hoisting Poona Police in the lead through Mark Anthony.

Four minutes into after scoring the first goal, Amit Rajput creamed in the second goal for the cops in 17th minute.

The pressure extended to Rakshak Sports was quite evident as their defenders faltered in locking up the holes. They also conceded far too many penalty corners. Prakash Sapkal and Prakash Devar succeeded in converting two penalty corners into goals in 33rd and 36th minute.

In another exciting match, Super XI prevailed upon Green Meadows 2-1.

Santosh Musale scored first goal for Super XI in 3rd minute on Ganesh Shirke’s pass. The second came through Ganesh Shirke in the 18th after breaking into the rival’s defense.

Green Meadows weaved several patterns, but could only get one past the Super XI goalkeeper in 37th minute through Rahul Zora.