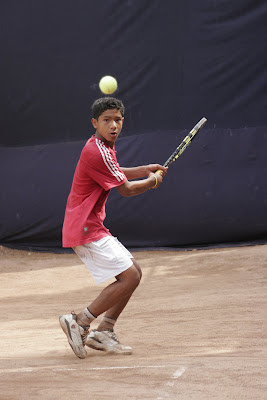 With this win, Tushal sailed into semi-finals and will compete with Rohit Bisht to reach finals on Thursday.

Tushal did not show any signs of nervousness of taking on third seed Sai. He played a cautious game restricting his shots. After taking an early two games lead in the first set, Tushal played hard tennis swishing the ball back and across to perfection.

Another hallmark of Tushal today was he did not commit any double faults in the entire match.

The second set was a cakewalk for him. He thrashed Sai 6-1 with a forehand winner, which his rival failed to connect.

With this win, Tushal is fancying his chances of winning the tournament. But, he is aware of beating Rohit Bisht first in the semis.

Rohit and Tushal met four times earlier and on three occasions, the former had prevailed upon the latter. Tushal won the only match at Jamshedpur in the recent past.

Hemant Bendre, a well-known tennis coach, fancied Tushal’s chances of beating Rohit. “Tushal is an attacking player and Rohit a retriever. On these courts, Tushal could give Rohit a run for his money,” he said.

Other two city lads Arjun Kadhe and Aniruddha Darp crashed out of the tournament after losing to Ronit Bisht 6-4, 4-6, 6-2 and Devpriya Jaiswal 6-2, 6-2 respectively, who advanced into the semis.

While Aniruddha surrendered to his opponent without much spunk, Arjun handed some anxious moments for Jaiswal in the second set, which he eventually won 6-4, before going down fighting 4-6 in the first set.

After pulling off a win 6-3, 8-10, 9-7, Palha had all praise for Namita saying that her rival had all the shots in her book and played exceedingly well to whack me out in the second set tie-breaker.

“As the match went on in the third set, Namita started to improve her tennis game by game. She could have won the match in the third set tie-breaker, but for her miss-hit she lost the match,” Palha said.
Posted by B D Narayankar at Thursday, May 31, 2007