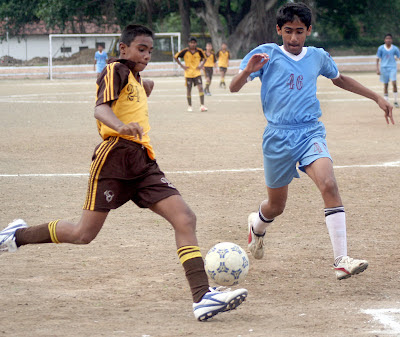 PUNE: Perhaps an attacking 4-1-4-1 pattern weaved by Bishop’s (Camp) in the second half cost them the U-14 Bishop’s Invitational Football Tournament final, losing to St Vincent’s 2-1 at Jeejeebhoy Ground here on Wednesday.

Perhaps Bishop’s would have hung a cheerful face if they had employed the first-half pattern of 4-4-2 as they hardly gave any chance to Vincent’s to break into their citadel. The four midfielders were choking up their key players -- Samarth Salvi and Dwayne Periera.

In the absence of any resistance coming from the Bishop’s wingers in the second half, Samarth Salvi, Dwayne Pereira and Yashraj Sawase got some room to devise attacking moves from both flanks and net two goals.

The Bishop’s dominated the first half breaking in twice through their big guns – Keegan Bast and Arthur Vieyra. Keegan, however, disappointed the home crowd, who were right behind him throughout the match, missing a couple of sitters.

The Vincent’s also were not far behind. They had a couple of wonderful moves through Dwayne Pereira, Yashraj Sawase and Moiz Bandookwala, but could not convert them into goals.

Deadlocked at nil-nil in first half, Faiz Sayyed made the first breakthrough for Vincent’s scoring in 36th minute with a powerful curving shot through a 50-yard spot kick that beat Bishop’s goalkeeper Jerry Murphy.

Yashraj Sawase made it 2-0 in 38th minute after firing in a delightful left-footed kick into the net on receiving a floater from Dwayne Pereira from the right flank.

A minute later, Bishop’s jumped into the ring by earning a spot kick inside the box. Keegan Bast romped home the goal wide of goalkeeper Ajinkiya Sarnobal on a deflection from a Vincent’s defender, who tried blocking an incisive kick by Arthur Vieyra.

The Vincent’s slowed down their game just ten minutes away from the final whistle making life difficult for Bishop’s to raise their visions of a comeback. Perhaps it was not the day for Keegan who missed the best chance to equalize when he shot the ball towering over the crossbar in 55th minute.

Earlier in U-12 summit clash, Nandkumar Angirwal-coached JN Petit beat Vidya Bhavan 3-1 in the tie-breaker after both the teams could not score any goals in regulation time. Hemant Mali, Raj Patil and Nitesh Mutreja converted the penalties for Petit and Angad Gill for Vidya Bhavan.