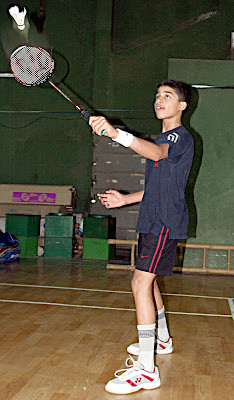 PUNE: Perhaps he could have made himself a good alrounder in cricket. He is an amazing character who takes pleasure in doing things, which is not in his strides, professionally. He was officiating as linesmen in one of the matches, which he did it to perfection. But, before that he showed what he is good at, thrashing top players.

It was not for the first time Amey had been involved in an embittered on-court battle with Gaurav. Last year too, Amey had celebrated a win against the second seed.

However, he did not wallow in this victory. He played as a true professional dumping the exhilarating past before stepping into the battlefield. “Since I have played him last year, I was expecting a tough competition from Gaurav. He also is a top-ranking player in the tournament,” Amey told Maharashtra Herald after the match.

Amey sprang from the depths after conceding an initial lead to Gaurav in a fascinating encounter in the first game. “I lost my track in the initial stages losing five points,” he said.

He got his rhythm back when he started spanking the shuttle across the court with great vigor. Perhaps these shots would have been inspired by a Bollywood flick where the hero swears by his mother to avenge his father’s death.

Soon with the flurry of smashes, drop shots and series of sallies, he took the game away from his opponent in a jiffy that camouflaged the inconsistency of Gaurav. This led to the loser’s downfall as he took the game lightly and allowed the uncanny Amey barge past him.

Soon Amey caught his opponent’s weakness; he started tossing the shuttle to Gaurav’s back, which was troubling him a hell of a lot. “As I was feeding him with tosses, I was delivering a flurry of drop shots, confusing him totally,” Amey said.

Soon Amey was ahead 18-15. Here at this stage did he realise he could win the first game and arrive on the court for the second dig, confidently. Gaurav, however, kept his cool and surprised Amey sending him into a tizzy for a moment after garnering next three points –the scoreline then read 20-18.

Finally, Amey banged one onto the floor forcing Gaurav to reach for the shuttle, who missed it, conceding the game.

Amey had it easy in the second dig when he identified Gaurav panting and running across the court. Hence he employed the theory of tiring him out. Gaurav failed battling his fatigue and committed errors on his serves.