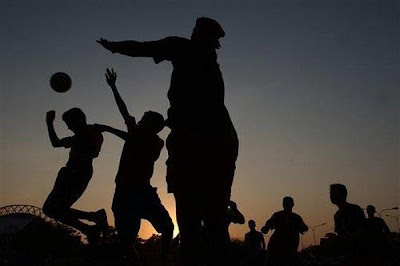 bapun@sakalherald.com
PUNE: Before pulling off an exciting victory, Chetak ‘A’ had to sweat it out against a redoubtable Sangam Young Boys before getting the better of them 2-1 to gallop into the semi-finals of the Vahatuk football tournament at Chandrashekhar Agashe Ground here on Thursday.

Chetak will now meet Fatima XI in the semi-finals. Fatima XI are in the middle of a good run in the tournament with the likes of Viren D’Souza, Vijayan Arland and Sanu Jacob showing good form and scoring for their team at regular intervals.
Conscious of a semi-final match against Fatima, Chetaks put a cap on their emotions to celebrate their victory over Sangam Boys. But when they took the field today, they were a confident-looking bunch, ready to play their hearts out to book a semi-final berth.

Lack of craftsmanship from Sangam Boys gave enough room for Chetak to seize control over the match. Chetak chalked up a couple of explosive attacks from both flanks inside ten minutes from the start. The shots were well saved by Sangam goalkeeper Rajesh Pardeshi, who did well to collect the ball at knee-height.

The first one came from Rohan Belvelkar in the 8th minute off a pass from Kartik Mandrekar. Rohan tried to slide the ball to the right of the keeper, but failed to beat Pardeshi, who anticipated the shot beautifully before palming off the ball for a corner. Chetak forwards took advantage of Sangam’s meek defence.
Sangam were guilty of allowing too many open spaces for their opposition to manoeuvre. It was in the dying stages of the first half that medio Ruturaj Thakkar floated an exquisite chip from the right flank to Aditya Bhaskaran, who smacked the ball into Sangam Boys’ net, giving them a handy 1-0 lead for Chetaks.
After the lemon break, the Chetaks strode out confidently, but took time to get off their blocks. It was in the 36th minute that they got into their groove with captain Mangesh Shinde attempting to find the back of Sangam’s net just outside the box.
This shot served to put Chetak in the right frame of mind to hold sway over their rivals. Their prying moves finally bore fruit in the 37th minute when Manvendra Mishra slipped through the Sangam citadel after dodging past three defenders and slamming the ball past goalkeeper Pardeshi.

Though the goal underlined the supremacy of Chetaks, Sangam Boys did well not to lose heart and fought their way up till the dying minutes of the game. This zeal, in fact, brought some cheers onto their face when Raju Nikam nodded home a superb header past the Chetak goalkeeper in the 39th minute.

The goal, however, was not enough for Sangam Boys to remain in the tournament. It only served as a consolation for them.