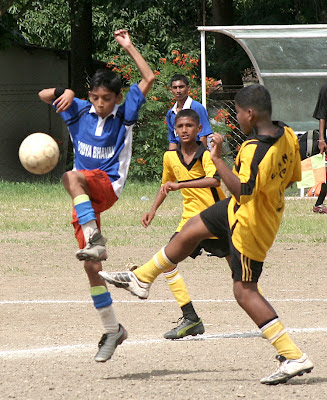 In a see-saw match, centre forward Arthur Vieyra was the star attraction for Blues. He smashed two goals, taking his tally to five in the tournament. In previous encounter against Army Public School, he had scored a hat-trick.

An out-and-out aggressive player, Arthur was the backbone of Blues’ attack. He was all the time available for unleashing an attack inside Yellows’ box after being constantly fed by wingers Vedant Gulati and Keegan Bast.

Right from the start of the whistle, the Blues found their groove and broke into the Yellows’ fort when Keegan Bast chipped the ball in from the right corner that sailed over grazing the crossbar.

Arthur, however, fired the first salvo for Blues in 6th minute. It was an extraordinary spot kick just outside the box. The flight mesmerized goalkeeper Abhishek Upadyha that sailed in bulging the net behind.

Thereafter, the Yellows increased their pace and crafted quite a few moves down both the flanks, but their forwards failed to respond effectively. Amidst this, Soham Kothuriya gave some hope for Yellows. He nearly put in an equiliser in 20th minute when his header was well collected by keeper Jerry Murphy.

A minute later, Soham created a penetrative move and sprinted with the ball to the extreme right and floated in a cross that bloated the net behind keeper Jerry, leveling the score 1-1.

In a counter-attack, the Blues fancied their chance of going ahead through Keegan and Arthur combo. Keeper Upadhya, however, spoiled their party after blocking Arthur’s kick.

In 24th minute, the Blues were lucky to get a spot kick just inside the Yellows’ box after defender Nikhil Srinivasan was faulted. Arthur did not miss the opportunity and crushed the second goal for his team.

Leading 2-1 in the first half, the Blues strung a superb move in 32nd minute through Prateesh Sabde, giving a long aerial pass to Keegan, banging in the third goal for Blues.

After several fruitless attacks by Yellows, they struck in 45th minute through Jonathan Young converting a penalty kick after Anshul Sharma was faulted for handling.

The Yellows struggled to string together any decent attacking move in dying minutes. They looked down-and-out with a formidable citadel of Blues.