Amey, Sudhanshu to clash in final 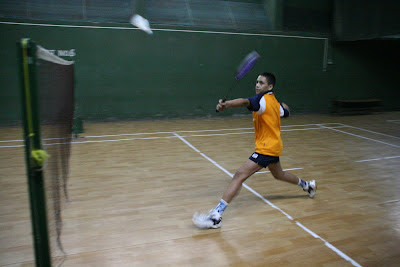 PUNE: Amey Tilloo, an unseeded player in PDMBA tournament, caused yet another upset trouncing third seed Ajit Kumbhar 21-18 and 21-19 in a nerve-wracking encounter here on Wednesday.

With this win, Amey will take on top seed Sudhanshu Medsikar in the final to be played on Thursday. Sudhanshu beat his rival Viren Deshpande 21-8, 21-9, in another semi-finals, without much resistence.

A tremendous player himself, Amey missed on his ranking, as he failed to participate in the Mahila Mandal District Badminton Tournament held recently.

Known to his mates as a giant killer, Amey had a tough task cut out for him to face the challenge of a top player. Unfortunately, he ran fever last night and was not in his elements at initial stages of the match.

Perhaps, Amey’s performance had something to do with his health as he began his campaign poorly, meekly conceding first five points to Ajit.

He, however, recovered soon barging past Ajit, taking 6-5 lead on his serve. Just when he had the opportunity to further his lead, Amey faulted and lost six vital points to Ajit. These mistakes, however, did not take the toll of Amey’s capabilities. Instead it inspired him to stay focused in the match.

When the score read 11-6 in favour of Ajit, Amey did not let his tempo up and dominated the game, taking three-points lead consistently.

The 21-18 win in the first game should have motivated Amey to play a better game and take an initial lead. In contrast, he conceded 11 points to Ajit. But again he made a magnificent comeback, maintaining three-points lead constantly.

What was striking about Amey was he brought variety into his game. In the first game, he focused on rallies, in the second he played an attacking game once he had tired Ajit.

Meanwhile, top seed Sudhanshu posted a comfortable victory over Viren Deshpande to storm into the final. He played a flawless game much to the delight of his coach Anil Modak, who was egging on his favorite disciple from the sidelines of the court. “Sudhanshu has improved as a player. He has brought variety into his shots. Normally, players in his category do not do that. I am pleased with his performance,” Modak told Herald after the match.

Sudhanshu had a gameplan to mesmerize Viren. He forced Viren into rallies by tossing up the shuttle and then pouncing on it to collect vital points. “At any point of time, I did not feel any competition from Viren,” he added.