Sarang tunes in to lift U-16 boy’s title 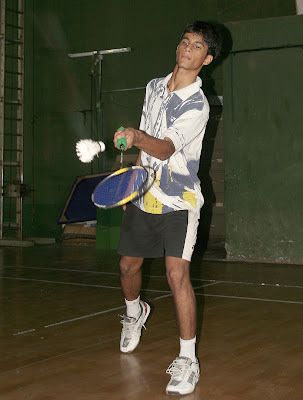 Pune lads also were not far behind and proved their mettle by pulling off their title victories in style in U-13 and U-16 boy’s singles event. While Sudhanshu Medsikar prevailed over giant killer Shushruth Karmarkar of Mumbai suburb 21-14, 21-17, Kunal Bhide raced away to a 21-13, 21-17 verdict over compatriot Siddhant Ghorpade.

Siddhant Ghorpade, however, had a ball with his double partner Varun Gujar, smashing out Virkar Kaustubh-Jatin Verma combo 21-14, 18-21, 21-17 in U-19 boy’s doubles final.

Both Sarang and Neeraj were on song in a nerve-tickling final. Spectators were seated on their edges of their seats throughout the match, unsure who would have the last laugh. The match was so fascinating that Sarang came from behind at crucial junctures to snatch victory from Neeraj in dying moments of both the sets.

Nursing an injury at Nanded tourney, Sarang lost to Neeraj in semi-finals there. Here he came out supremely fit, hardly compromising on his speed and shots. He got that right, giving some anxious moments for his rival.

Sarang never looked in a hurry, giving an impression that nothing was happening even though he was trailing 20-19 in the first set. He forced Neeraj to play near the net, feeding him with drops. He smashed to earn vital points when Neeraj tossed up his incisive drops. Sarang unbelievably was a persona of supreme patience. He won the first set 22-20.

Sarang began his second set poorly, trailing 12-18. He sprung back with his precise tosses and drops, breaking Neeraj’s rhythm, making him run all over the court.

Capitalising on Neeraj’s diffidence, Sarang unleashed a range of shots and slices to collect important points. Suddenly he caught up with Neeraj 19-20 down. He, ultimately, won the battle 24-22.

Neeraj, on the other hand, was guilty of faulty service returns on several occasions.