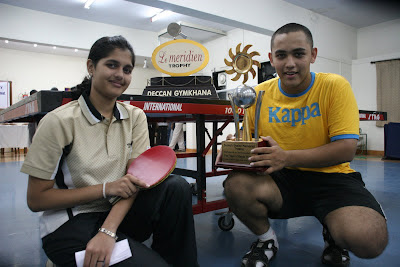 Aslesha was a revelation indeed, especially in women’s final. The top seed came with delightful exhibition. Her anticipation stood right throughout the match. Her defense was effective everytime Ruhi grew aggressive.

What really snatched victory from Juhi were Aslesha’s finishing strokes. They had venom and stinging enough to win vital points in crucial junctures of the match.

Aslesha showed that sometimes playing a waiting game and mixing it well with attacking finishes could be deadly. Everytime Ruhi tried to up the ante, Aslesha was equal to it. Most of the time, she won the battle on that count.

Sometimes, Ruhi was even better everytime she tried to block when Aslesha went for the kill. An exasperated Ruhi tried to hit her way out of trouble but succeeded at few occasions. “Ruhi is a fine blocker than an aggressor,” Aslesha told Herald after the match.

Ruhi found it difficult to break Aslesha’s rhythm. She failed to loosen Aslesha’s grip. With her confidence dipping, she conceded points in a heap.

Aslesha did not take much time to provide the finishing touches and ended Juhi’s resistance much earlier than anticipated.