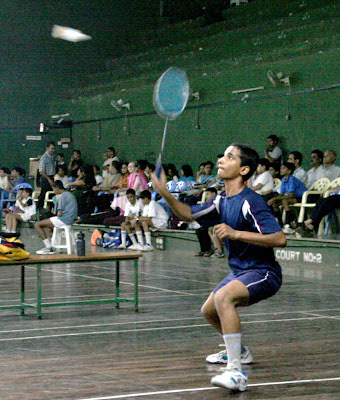 PUNE: He didn’t rejoice, nor jumped in tears. He walked out from court-two with shoulders drooped. For a moment one would imagine he had lost the match. But hold on. He has just done the opposite, breathing fire, he defeated his opponent convincingly in pre-quarter stages of U-13 boys’ singles badminton tournament organized by PDMBA at WIE Sports Complex here on Monday.

Just before the start of the match, Medsikar showed immense confidence and self-belief, but when he took charge at court-two, he was a different player – dejected and frustrated for not getting his shots where he wanted to.

Most of his returns were tossed up, making Rense to play drop shots winners in an attempt to bounce back in both the games. “I was not in my elements. I won with a margin of 15 points against an unseeded player. The score of 21-4, 21-2 would have boosted my confidence before moving into the quarterfinals against third seed Ajit Kumbhar tomorrow,” Sudhanshu told Maharashtra Herald after the match.

Notwithstanding his comments on his game today, Sudhanshu played a rather balanced and composed game, unleashing his shots to perfection. Rense was no match to his delectable shots and was found wanting in reaching out to the shuttle.

What was so good about Sudhanshu was his cool temperament. He played the game as though nothing had happened. His slice drops made him look an intelligent player. He forced Rense to make most of the running round the court with his tosses and cross-court placements.

It wasn’t an arduous terrain for Sudhanshu to tread. He defeated his rival as easily as a knife slinking through a cake of cheese.

In another pre-quarterfinal match, Viren Deshpande defeated Yash Deepak Shah 21-9, 21-13 and sneaked into last eight in U-13 Boys’ singles event.