Sachin to lock horns with Rahul in finals 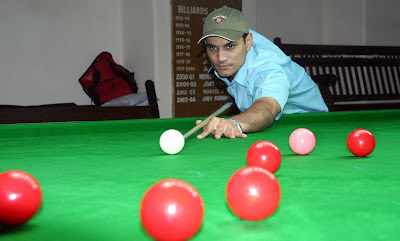 PUNE: There is something magical in the manner a cueist struts his stuff on the snooker board. That calculated push, that perfect poise and his deadly potting are enough to send spectators in a tizzy. While cueists like Harish Talawade and Jaideep Deshpande have been wowing snooker-lovers with their style, not far behind are Deccan Gymkhana’s Sachin Sancheti and Rahul Padhayay, who have ruled the roost with the same explosive energy in this year’s Poona Goan Institute (PGI) Snooker Championship.

Playing in his semifinals match here on Thursday, Sachin defeated Tony D’Silva with 4 frames to one after going down fighting in the first frame. In another semifinals, Rahul Padhayay beat Jaideep Khandekar after losing first two frames. With these semifinal wins, Sachin will now meet Rahul Padhayay in the finals to be played on Friday.

Sachin won the match 29-55, 65-54, 65-40, 68-2, 48-41. The top seed started his low-key campaign in the first frame making far too many mistakes, allowing Tony to grab the opportunity to pot the balls with ease. “I should give credit to Tony. He played an excellent first frame,” Sachin told Maharashtra Herald after the match.

The next two frames – second and third – too was no different from the first. Sachin conceded initial leads to Tony. But unlike the first frame, he rocked back strongly to pot colors and reds consistently.

The fifth frame was a real test for both players. It turned out to be black-ball-frame match. The score then was 3-1. “I needed pink, but he potted it. Instead of potting the black, Tony played safe. If he could have potted, the scores would have read 3-2,” Sachin said.

“Though Tony is a good opponent, he was not able to consolidate upon his early leads in first three frames. He, however, was getting me the snookers, but I was able to remove them,” he said.