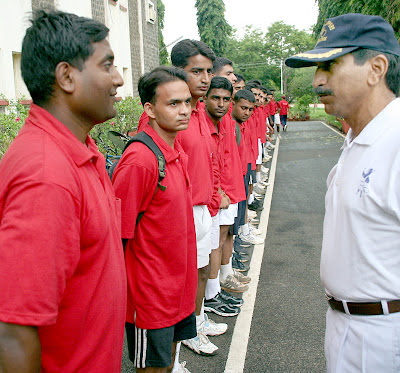 PUNE: They waded their way on their cycles chanting ‘Bombay Sappers Zindabad-Maharashtra Zindabad’ on the premises of Bombay Engineering Sappers Headquarters as if they were commemorating a victory of an hard-fought battle. One could have imagined they were vociferous about their victory after having vanquished the enemies with sophisticated weapons. But that was not the case. Instead, they did it after pedaling thousands of kilometers for five days understanding the problems of ex-servicemen and cultural heritage of Konkan Maharashtra.

After a five days of cycling expedition in Konkan region, as many as 31 young officers of Bombay Sappers, who began their journey on July 22, finally returned to BEG headquarters here on Thursday after Major General (VSM) K Babayya flagged in the expedition.

After a brief introduction, Expedition Leader Captain Kirankumar Giri and senior most young officer Lt Siddharth Vyshampayam gave a detailed account of their expedition to Babayya.

Speaking to Maharashtra Herald, Siddharth said the expedition was planned with an aim to foster the spirit of adventure and imbibing rich culture and history of Konkan Maharashtra. “We traversed major parts of Kolhapur, Sidhudurg and Ratnagiri regions for five days on cycle and vehicle,” he informed.

Apart from visiting Kolhapur, Sindhudurg, Deogarh, Vijaygarh and Raigarh forts, the team interacted with ex-servicemen and widows, making them aware of recruitment policies, ECHS and various other facilities. “Among all the forts that we visited, we liked Vijaydurg fort the most for its magnificence and enormity,” he said.

What was striking about it was the laying of huge boulders in and around one-kilometer radius of Vijaydurg fort. “This was done to protect from Portuguese and British invasions. No ship could sail near the fort due to heavy stones. Even if it did, it got stuck in the sea,” Siddharth said.

The team was particularly moved by recruitment problems faced by people there. “Many urged the authorities concerned to reduce the height requirement for army recruitment. They urged them to adopt the policy prevalent in Garhwal and many other hilly regions where people’s height generally is less,” he added.

The team also studied the terrain and updated the data on natural resources.
Posted by B D Narayankar at Friday, July 27, 2007