It's champagne time for St Vincent's 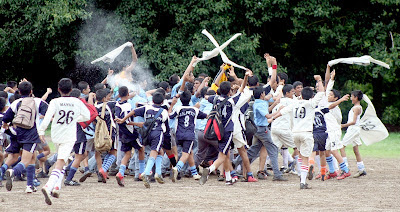 PUNE: In an arena where success has a short lifespan and spectre of defeats always staring at you, it is indeed a heroic act for any seven-time title-clincher to grab eyeballs and prove that fire still burns in their hearts even now.

The U-18 Surendra Anand Memorial Inter-School Football Tournament finals saw St Vincent’s and Army Public School (APS) trying to shine through as they were desperate to raise a toast for their retired players of yores. At last, it was St Vincent’s that re-lived their coach Wilson Andrews victory razzmatazz once more.

The Vincent’s were convincing winners against APS, thrashing them 2-1, which turned out to be a close encounter in dying stages of the match, after both the teams went into the first half goalless.

A sparse spectators, occupying some corners of Loyola Ground, saw Craig Pereria and Danish Shaikh pierce a goal apiece for Vincent’s. Deependra Singh Chauhan was the lone scorer for APS.

Craig Pereria made the first breakthrough for Vincent’s, scoring in 40th minute with a powerful header from inside the penalty box on a corner kick.

Danish Shaikh made it 2-0 in 47th after receiving a cross from Akash Deodhar and firing in from the edge of the box to left-hand side of APS goalkeeper Jaswaran Singh.

The Vincent’s failed to raise their visions of a superlative game as Amrutam Christopher and Steven Charles, both forwards, displayed a below par game. Perhaps there was something to do with the ground that they played on today.

Unlike the SSPSM Ground, Loyola Ground was a difficult terrain as it was an arduous task for players to accelerate their pace. In fact, they were tired out towards the end of first half itself. As a result they were found wanting in running past their opponents to cream in the easiest of goals.