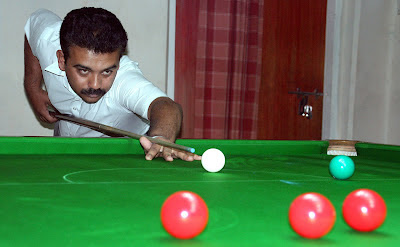 PUNE He hopped mad. Someone’s conceded the finals to him and you know, this just makes him happy. One would think when you are second to somebody, being nervous is routine. But, no, not for Rahul Padhayay. He played a superlative game to take the sting out of top seed Sachin Sancheti forcing him to eat grass in the pulsating final match of the PGI Snooker Championship here on Friday.

Rahul outplayed Sachin in all manners, potting the balls intelligently and removing a series of snookers loaded against him with great precision. For Sachin, who mostly believed in playing safe, could not capitalise on his present form, which was great till last night.

Today he appeared out of sorts – not getting the potting right and committed fouls at crucial stages of the second, third, fourth and fifth frames. Rahul took advantage of these mistakes and took lead, leaving the top seed gasping behind.

Sachin started his campaign on a high note taking an initial lead 45-17 in the first frame. Rahul bounced back with 19-points break coming close 36-45 in his favour. “I needed just a pink to pot, but I faltered. Sachin, however, got the color and won the frame,” Rahul told Herald after the match.

Sachin got an early lead in the second frame, but could not check Rahul’s juggernut from rolling. After taking a vital seven-point break to come close to Sachin 7-14, Rahul played wonderfully well exhibiting the skills of potting and gathered a crucial break of 45 points. “This gave me immense confidence and I realised I could win against Sachin’s calibre if I maintained the same tempo. I won the frame 69-38,” he said.

Sachin began his third frame with a bang taking an early lead of 26-9 lead. Rahul, however, grabbed every opportunity coming his way and collected 17 vital break points.

There was scope for Sachin to consolidate on 26-23 scoreline in his favour, but frittered away by committing fouls on couple of occasions conceding 24 crucial points to Rahul.

Rahul also got 32 break points at a crucial juncture which gave him scope to vanquish Sachin. Fifth frame was a cakewalk for Rahul, who won the frame 43-5.
Posted by B D Narayankar at Sunday, July 29, 2007