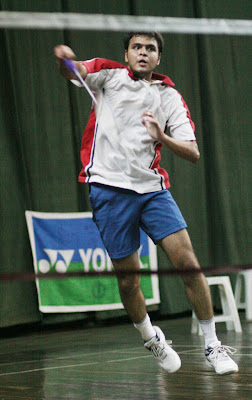 Shaking hands with his rival Sachin after defeating him, Akshay could not believe he could win the game that easily. Sachin gave a tough time to Akshay in the second game, defeating him 21-11. “He played really well. He was getting everything right. I was a bit over confident after winning the first game 21-10,” Akshay told Maharashtra Herald after the match.

Akshay began his campaign on a high note, capitalising on his opponent’s negative tactics. “Sachin was defensive and nervous initially,” he said.

Akshay made Sachin run all around the court in an effort to tire him out. Eventually Sachin committed a lot of mistakes. “My rival was dropping the shuttle into the net and swishing it out of the court many a times. I knew he was struggling for form,” Akshay said.

Akshay did not lose the opportunity to win the final game and the match after taking the initial lead. “At this point, I was confident. I knew what I was doing and decided what to do to finish off the game. I checked my shots and avoided netting the shuttle. It was not that Sachin was not playing well. He had his moments in the game,” he said.

In the doubles encounter, Solaris’ Harshad and Nakul registered a straight win against rivals Sachin and Nikhil.

Initially, Harshad and Nakul were cautious in playing their attacking game. Soon they wriggled out of it and played some exhilarating badminton.

The Solaris duo was wonderful to watch with their intelligent drop shots and fabulous serves and returns from the sidelines.