A new chess star on the horizon 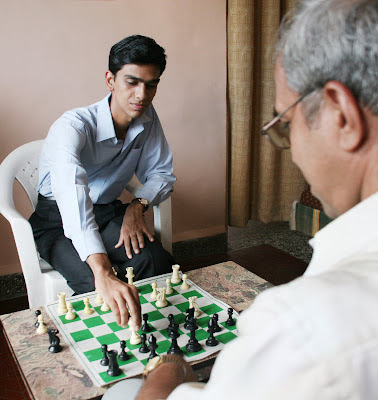 PUNE: After pocketing the U-19 Blitz Chess Tournament held a couple of day's back after upstaging top seed Saoumya Swaminathan, it is big time for Aniruddha Deshpande to prepare for GH Rai Soni Chess Ratings Tournament to be held at Nagpur from July 14 to July 20.

A diehard fan of World Champion Bobby Fisher and two-time U-19 State Champion, Aniruddha has been practising hard to prepare himself for the Nagpur tournament to increase his ratings. Currently he has 2113 points to his credit and is palnning to cross 2200 points in the next six months.

His preparations are anything from reading books on chess and praticising with friends like Sohan Phadke, a rated player, and Joseph D' Souza, his coach. " I am preparing for some special openings like Najdrof and Ruylopez Defense through books and CDs," Aniruddha told Maharashtra Herald.

Is it possible to play without really looking at the ratings? He replies: "It is necessary to know where you stand. Ratings reflects the player's strength. I cannot neglect it."

Does it worries you, you are still a long way to go to get into the top bracket? "It worries me. A lot of work has to be done and it is through this we increase our ratings," he said.

Aniruddha's last year was not that good as he could not increase his ratings. "I, however, was not out of it completly. I stood second and third in couple of U-19 tournaments," he said.

However, this year has been fruitful adding 20 more points against his name in Jolly Club and Shirgoankar Rating Tournaments.

Celebration is a way of life for this young prodigy, he keeps it very simple. "I celebrate my victories by hosting small parties among my friends. But I forget about anything after that and concentrate on the next event. Heart broken. Yes I am when I lose out to somebody big or small," Aniruddha said.
Posted by B D Narayankar at Wednesday, June 20, 2007