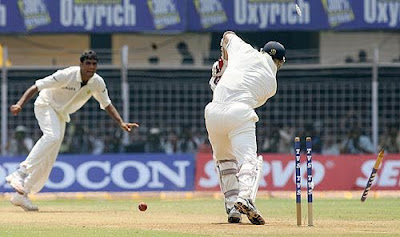 PUNE: In sports what turns-on people most is speed. From football to motocross it demands attention, but nowhere more so than in cricket. Riding on this epithet, Munaf Patel has been picking up accolades and at one time was termed the fastest bowler in India.

He began his stint with a bang making inroads into the realm of fame in his debut Test against England at Mohali in February 2006, helping India script a magnificent victory with a devastating seven-wickets haul. But all of a sudden Munaf lost pace and looked a medium pacer on India’s tour to South Africa and Bangladesh recently.

There absolutely is nothing wrong with his bowling, but has been carrying a bagful of injuries on a regular basis. This is not only worrying Munaf’s mentor Ismail Matadar, but also his supporters.

They are scared to reminisce what had happened to Tamil Nadu’s Laxmipathy Balaji whose career was abruptly shut after a prolonged injury. But are optimistic about Munaf bouncing back as fitness authorities have already declared him fit.

As things stand for Munaf, he really has to wade his way back through the dirt of competition. There is Ishant Sharma, R P Singh, Zaheer Khan and S Sreeshant, jostling to hog limelight. Except Sreeshant, who had been out of action for Bangladesh dig, the rest of the bunch have shown signs of great form, picking up wickets regularly.

Names such as these do not worry strong-willed Munaf. He has been training at MRF Pace Foundation in Chennai and is confident of being recalled in Team India as soon as possible.

Munaf told Maharashtra Herald from Chennai that he was feeling better after interacting with MRF Chief Coach T A Sekhar. “I am brimming with confidence. I am running in well, feeling relaxed,” he said, adding: "Sekhar have helped me so much technically and mentally. I honed my skills here.”

Munaf, however, was unlucky to have bowled in the nets for a couple of days only due to rains. Sekhar said two days of net practice is not enough to sort out bowling problems. “Whatever I could gauge is that he is comfortable with his bowling. He has been here earlier before and feels good to work under Dennis Lillee and myself,” Sekhar said.

Mentor Ismail from Bharuch expressed confidence over Munaf’s comeback into the Indian team. “Though there is a crop of good fast bowlers in the country at present, Munaf has the potential to be with his national colleagues any moment,” he said.

“Knowing Munaf from close quarters, he is a fighter and does not lose heart easily. Nor names like Ishant Sharma and R P Singh does bother him. Munaf is Munaf and Ishant is Ishant,” Ismail said.

Munaf’s physical trainer Ramji Srinivasan told from Chennai that Munaf was in fine fettle and had shown signs of improvement.

“Every bowler undergoes a bad patch. Even Shaun Tait had bowling and injury problems. But when he came back after a gap, he became the deadliest bowler in the world. Look at his World Cup performance. Munaf will not race into oblivion like Balaji. He is fit,” Ramji said.

At present, Munaf is sweating it out at the MRF Pace Foundation Centre and hanging out in the evenings listening to music. In the recent past, he had not much occasion to sing on the field, but his time will surely come again. Just don't blink.
Posted by B D Narayankar at Saturday, June 23, 2007