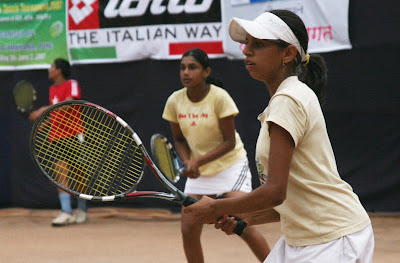 PUNE: Natasha Palha and her partner Namita Bal clawed their way out down under to overpower Vaidehi Bhagvat and Prarthana Thombre 2-6, 6-3, 6-4 to win the doubles title of the PYC ATF U-14 Series played here on Friday.

Namita and Natasha took some time to gather some momentum, in the process losing their first set 2-6 to their rivals who were in murderous form, reeling off some smashing volleys, chips and shots across the corner.

But, they wriggled out of the rut soon and played some exhilarating tennis, breaking their rivals twice in the first and third game of the second set. Namita was wonderful to watch with her intelligent chip and volleys near the net and Natasha was fabulous on her serves and returns from the base line.

Leading the second set 6-0, Natasha and Namita lost their cool and committed many errors and double faults to concede the next two games. This, however, did not hamper their celebrations to win the second set when Namita crunched past Vaidehi a lovely volley on Natasha’s serve.

‘Point-by-point girls’, the yell from the egging India player and a grade-three coach Nandan Bal would have boosted Namita and Natasha’s confidence to go for the kill in the decider. And they exactly did that.

Their celebrations was short-lived as Natasha and Namita forced them into the rallies and waited for them to commit errors and broke them 3-4, catching them up. Natasha and Namita won the next three games and the match after a grueling effort.