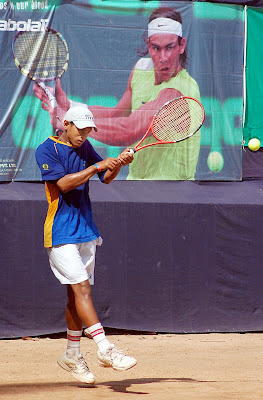 Photo by Mukund Bhute
B D Narayankar
bapun@sakalherald.com
PUNE: No matter who wins. It wasn’t a concern for Rajinder Bisht as the coveted cup would anyway come to his house. But, for the two brothers, emotions ran high on court one, when both of them battled it out to lift the PYC ATF U-14 Series Title and collect some vital points to break into the international arena. Ultimately Rohit Bisht it was who bagged the honors after defeating younger brother Ronit Bisht 6-3, 3-6, 6-2 in the finals played here on Saturday.

Rohit played his rallies to perfection and never looked to miss the ball. This gave ample insight into Rohit’s gameplan, adopting a different strategy to blunt Ronit’s attack. Just the other day, in the quarterfinals, he had played an attacking game against the slow-paced R Ramkumar. “I adopt different strategies for different players,” Rohit told Maharashtra Herald.

After winning the first set 6-3, Rohit went down 3-6 in the second. Ronit appeared ominous, making Rohit stretch for the returns on either sides of the court. The sheer timing and pace in the shots shook Rohit’s concentration and finally he won the set 6-3.

Rohit broke thrice in the final set pouring water onto Ronit’s dream to win. The latter played far too many extravagant shots with most of them landing out. After conceding the first game, Ronit hinted at a tough set ahead after he broke Rohit’s first serve.

Somehow Ronit lost his focus, losing his third serve, giving a boost to Rohit, finishing his fourth serve 3-2 ahead.

“It was disappointing. I don’t feel I played my best tennis today. Most of the time I was hitting the ball into the net or outside. I did get my rhythm back in the second set, but I could not hold on it,” Ronit said.

Natasha Palha emerged clear winner in the finals when she steamrolled Ankita Raina 6-0, 6-0 in a rather one-sided match.

Natasha emerged clear favorite when she trounced Namita Bal, daughter of Davis Cupper Nandan Bal, in the quarterfinals. Thereafter, Natasha did not have any problem in defeating Zainab Ali Sajjad in semi-finals.