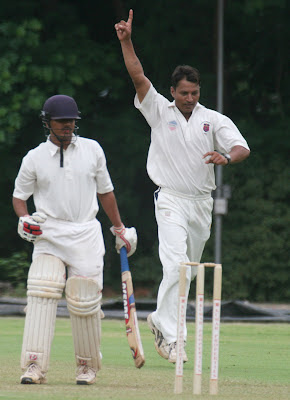 Both Ajay and Samad, bowling a superb line and length with controlled movement, bagged four wickets each, giving a tremendous boost to their confidence.

After a delayed start to wet conditions due to overnight rains, Poona Club captain Ajay Chavan sent Raigad in for batting after reading the windy conditions. Exploiting the situation, Ajay and Samad bowled to a plan making Raigad openers to play at the ball.

Both openers found going tough in the middle with Ajay and Samad getting the ball to swing. “The condition was similar to England. We were getting good amount of swing,” Ajay and Samad told Herald at tea.

Both bowlers unsettled the batsmen with intimidating bowling tactics too – making the ball to rise from short of a good length spot and hurling yorkers.

At one stage, Samad was on the verge of a hat-trick, but was unlucky to have not got a LBW decision in his favour.

In reply, Poona Club started their innings, losing Amit Kadam to Uday Gadre for one. They lost other two wickets in the form of Mayur Nighot (9) and Mithun Kirad (0) to the same bowler.

Poona Club were 55 for three with Prem Ahire batting on 40 runs after the umpires called off the play due to rains.