Mighty clash: The gloves are off for now 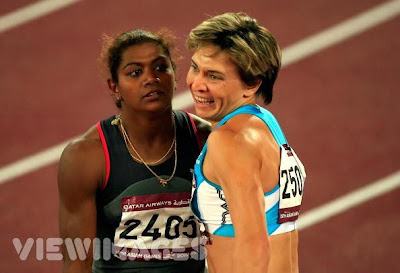 PUNE: The gloves are off. And they are swearing to outsmart each other. The battlefield is set to witness a battle royal between the much talked-about sprinters Uzbekistan’s Guzel Khubbieva and Sri Lanka’s Sushanthika Jayasinghe at the Pune leg of Asian Athletics Grand Prix scheduled to kick off here on Wednesday.

Even before the heat had cooled down in their boots, both launched their verbal attack to dust off their nervousness a day before the big event. “I don’t care against whom I am pitted. Let that be Guzel Khubbieva, I don’t bother. She pipped me at Doha Asiad because I was down with Chikungunya and injuries. Khubbieva is a fantastic sprinter and is running fast at the moment. My personal best, however, is 11.04 seconds and Khubbieva’s is 11.27 seconds,” Sushanthika told Maharashtra Herald.

Practising very hard under her physio Anurai Ranjit at Baburao Sanas Ground, she was concentration personified to give her best for Wednesday’s event. She was so systematic in her workouts that she appeared to have fancied her chances against Khubbieva in the 100 metres dash.
Understanding that Khubbieva was not an easy opponent to beat, Sushanthika diplomatically said she was not worried about her chances here, but concentrated on bettering her Guwahati Grand Prix timing of 11.25 seconds. “I am not sure whether I will be able to do that in damp conditions. There will be some difficulty to improve our records. I don’t have complaints though about the facilities here,” she said.

Even as she has not taken the Pune meet that easily, Sushanthika has set her eyes on putting a good show at Osaka World Athletics Championship and Beijing Olympics. “I believe I can do something different there. I have done it before amidst speculations whether I could do my country proud. I fetched bronze in the previous Olympic,” the 31-year-old sprinter said.

There is something to cheer about for the Asians when Sushanthika strongly believes that in terms of talent, they are not far behind the best in the world. What we need is more and more exposure and the self-confidence that we can excel under trying circumstances, she said.

Waiting for her turn to retaliate, Khubbieva gave it back to Sushanthika in her own language saying: “I respect the Sri Lankan, but there is no competition between us. I had beaten her at Doha Asian Games. She, however, can give a tough fight.”

If Punites want something exciting, they should not be cosying inside their rooms but visit Sanas Ground to witness Khubbieva and Sushanthika’s battle royal.
Posted by B D Narayankar at Wednesday, June 27, 2007