Many sides to a victory 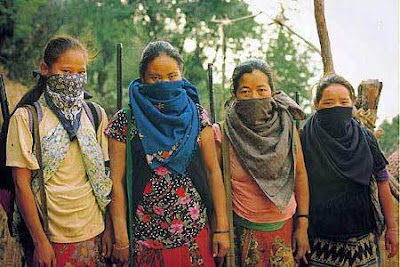 It is now upto Maoists to read the people’s mandate right. And it is upto Nepal’s political mainstream to be magnanimous to them in their moment of triumph
Days after a watchful world, represented by over 1,000 international poll observers, heaved a sigh of relief over the successful conduct of elections to the constituent assembly in Nepal, an uneasy fear grips this country. It has to do with the almost certain prospect of the ‘terrorists’ of yesteryear coming to power.
The results were apparently beyond the calculations of not only most Nepal watchers, but of the Maoists themselves. Up until the last moment, the Maoists were trying to secure support from the Nepali Congress as well as the Communist Party of Nepal-United Marxist Leninist (CPN-UML) to ensure their (Maoists’) victory in at least 35 places. Reportedly, Nepal’s erstwhile ‘Big Two’ turned them down, saying it’s too late now.
But what could have contributed to such a result in which the Maoists punched a humiliating defeat to the top two and established themselves as Party Number One?
The United States is dumbfounded. The party and people on its ‘terrorist list’ are most likely going to form the government in a country where America has a substantial stake. Indian ambassador Shiv Shankar Mukherjee, whose ‘brief’ to Delhi on the likely results has proved to be inaccurate, met Prachanda on April 13 to assure all cooperation from India. The assurance had become necessary as only a few days ago, M.K. Narayanan, security advisor to the prime minister, not only stated that India would want to welcome G.P. Koirala as Nepal’s new prime minister, but he also gave the impression that it would not feel comfortable with Prachanda in the same place. Moreover, India has not only failed in its assessment of the overall politics and likely poll outcome, it has also ended up backing the Terai Madhesh Loktantrik Party (TMLP) at the cost of the Madheshi Janadhikar Forum (MJF) that has now emerged as the biggest party in the Terai areas adjoining India.
It is still almost a month to go for the Constituent Assembly to come into existence as the percentage of votes each party will poll would be known only in about 10 days from now, and each party would be nominating its member to fill up the 335 seats under the proportional representation (PR) system.
Maoists, convinced that they will secure an equally impressive share of votes under the PR system, have already begun consultation with the losers, the Nepali Congress and the UML, about forming a coalition government under their leadership. But the UML has already decided not to join such a government, which clearly goes against the earlier consensus that the present coalition arrangement needs to survive for at least the coming 10 years.
The Nepali Congress headed by G.P. Koirala is also likely to follow suit, as a majority of the central committee members now blame the home ministry and the election commission’s leniency towards many incidents of physical intimidation of political rivals and terrorisation of voters by the Maoists as one reason for their defeat. Leading the charge is G.P. Koirala’s daughter Sujata Koirala, a minister as well as central committee member of the party, who lost the poll.
While the allegation is not without foundation, the mainstream parties in Nepal need to be more magnanimous towards the victory of the Maoists, and the causes that underlie it. The country and its ordinary people, with an average per capita annual income of 225 US dollars, want peace to prevail, and their personal security and safety guaranteed. The victory of the Maoists, who unleashed terror and violence as well as the killing of more than 13,000 people during the insurgency, was perhaps the best guarantor of that collective desire.
As the key political parties like the NC and the UML succumbed to the Maoists’ political agenda like republicanism, federalism and secularism, the people chose to discard the me-too politicians. In other words, the people recognised the Maoists as the principal agent of change or transformation of Nepal into a peaceful, democratic and economically prosperous country, a goal that the Maoists and the seven pro-democracy parties had agreed to work towards together under a 12-point agreement that was initiated and mediated by Delhi way back in November 2005. In fact, the CA poll was a fallout of that understanding.
Yet there are all kind of fears sweeping the country. Will Prime Minister G.P. Koirala want to be Nepal’s Mugabe by trying to hold on to the leadership of the government on one pretext or another? The Maoists need to prove that they are a changed lot who can work well within the established norms of democracy and respect its fundamental features in all respects. How they respect political dissent, the judiciary’s and the media’s freedom will be the criterion on which they will now be judged.
Eventually, it all depends on how the Maoists analyse the poll verdict. If they take it as an endorsement of the politics of annihilation and persecution of dissenters and ‘class enemies’ as adopted during the insurgency, they will lead the country into catastrophe. But if they infer that it is a vote for a new leadership, committed to peace, democracy and economic prosperity, they will truly be trudging along the ‘shining path’.
ghimire.yubaraj@gmail.com
Posted by B D Narayankar at Thursday, April 17, 2008