Will Rahul's charm work for Congress? 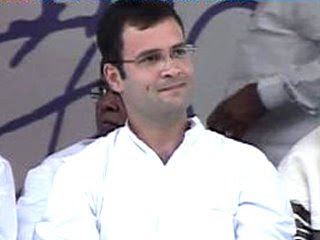 As the Battle for Bangalore continued, this is not just a crucial poll for Congress but a litmus test for Gandhi scion Rahul. With just one day remaining in the Mandate 2008, Can his charm woo the voter in Karnataka? or will he burn his fingers like he did in Uttar Pradesh.
Rahul Gandhi may have a fan following among young women, but he will need more than a charm offensive to win the battle for Bangalore. The AICC General Secretary kickstarted the poll campaign for the Congress during his "Discover India" tour.
Rahul Gandhi met tribals and Dalits in often ignored areas of BR Hill in Chamarajanagar and then even threw his SPG officers off guard to spend some time with this group of students. Even as the opposition frowned at the Gandhi scion's visit, for Congressmen in Karnataka the young leader's visit came as a breath of fresh air.
But they and even Rahul knows Karnataka is the litmus test for him. Perhaps bigger that Gujarat or Uttar Pradesh, where he burnt his fingers badly. More so as the Congress has a large base in Karnataka unlike Gujarat or UP. Rahul has been projected as the Congress's star campaigner and his performance in Karnataka is being watched very carefully as it comes on the heels of the 2009 general elections.

Courtesy: Times Now
Posted by B D Narayankar at Thursday, May 08, 2008