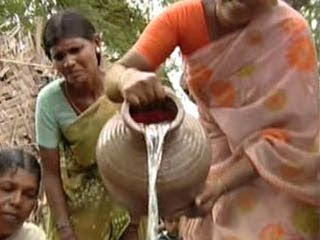 The Hogenakkal crisis seems far from ending. Even as politicians in both states haggle over the issue in the state capitals, those on either side of the Hogenakkal are a divided lot, too. But at the same time they are also eagerly waiting for this long standing issue to be sorted out.The river Cauvery at Hogenakkal waterfalls physically separates Karnataka and Tamil Nadu and has been the scene of the bitter standoff between the two states. At one spot in the waterfall, water from the Cauvery is to be drawn and distributed to people in Tamil Nadu. Though there is a plan on paper, nothing has been done on the ground so far. Meanwhile, 15 kms from Hogenakkal is the village of Tiruvalluvar. The water here is high in flouride content and the only one handpump in the village too, is contaminated. The Hogenakkal project that they had pinned their hopes on for fresh drinking water seems like a distant dream.Says Amudha, a villager, insists "Karnataka has to give us water. We have been asking for water for years and have been suffering from ailments like asthma and allergies. We want drinking water and they have to give it to us." Many villagers including children displayed mottled discoloured teeth suggesting dental fluorosis - the first visible sign of excessive fluoride exposure.Tamil Chelvam, another resident of Tiruvalluvar, says: "We are just going to take water that naturally flows into Tamil Nadu. Thirty lakh people in Krishnagiri and Dharmapuri districts will benefit. Everyone is suffering now because of the high fluoride content. We want water to drink, not to do business with." And this the story of not only Tiruvalluvar, but many other drought-prone Dharmapuri and Krishnagiri districts of Tamil Nadu. Even at the tourist destination of Hogenakkal falls, the tension of the water row is palpable as blue-red and yellow flags mark out territories for Tamil Nadu and Karnataka respectively.Divisions are deeply entrenched in the hearts of the people and now these are turning into emotional ones. At Marukkottai, the nearest Karnataka village to the Hogenakkal falls, the resistance to the water project is palpable.Villagers demand to know what makes Tamil Nadu special. "We don't get water, why should they?" asks Padmanabha. Others, like fisherman Sindaraju fear that their livelihoods might be affected if the water from the falls is not released and instead diverted.Even as the battle continues to rage on in both states, at Ground Zero it's the uncertainty that is unnerving. The conflict now threatens to deepen the divide between Tamil Nadu and Karnataka - but what many seem to forget, is that it is a drinking water project that is under the threat of being stalled over regional considerations. (By Susha Hebbar)
Posted by B D Narayankar at Monday, April 07, 2008