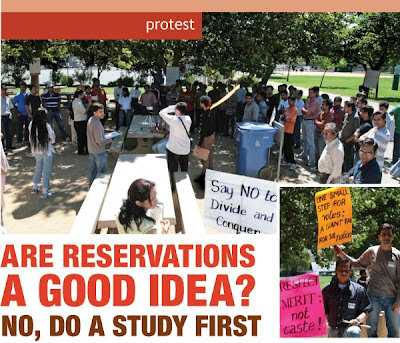 • OBC reservations and creamy layer: The Supreme Court has upheld the validity of 27 per cent OBC reservation in higher educational institutions. The reservation now stands at 49.5 per cent. This is disappointing because the court has put its seal of approval on reservations in higher educational institutions where merit should be the criterion for admission. However, in the present context, a contrary decision striking down a constitutional amendment would have led to a fierce confrontation between the judiciary and Parliament, which the court understandably was anxious to avoid.
The redeeming part of the judgment is the exclusion of certain categories of the creamy layer from the benefits of reservation. The rationale is that those who are economically well placed cannot be regarded as backward and thereby obtain undeserved benefits, depriving those who genuinely need them. This is elementary fairness. Non-exclusion of the creamy layer would lead to reverse discrimination and violate the essence of equality. Significantly, caste has not been made the sole determinative factor to the exclusion of financial and economic factors. The direction of the court to review the OBC quota every five years is welcome. The problem is whether the concerned governments will abide by this direction.
The Supreme Court heard all the parties extensively for weeks and after mature deliberations has delivered its via media judgment. It behoves all to accept it and draw a curtain on these contentious issues. There has to be finality. It is impossible to please every side.
• Fair British justice: Fairness is the hallmark of any civilised system of administration of justice. This was displayed in the recent judgment of the high court in London. The UK Government had sought to retrospectively make changes in November 2006 to the previous 2002 scheme, whose professed aim was to attract ‘high human capital individuals’ who had the qualifications and skills required by the UK businesses to compete in the global marketplace. Under the 2002 scheme, points were allocated for educational qualification, age, salary and UK experience, and UK study. As a result of the changes effected in 2006, highly skilled migrants programme visa holders had to reappear for examination. This necessitated higher annual income and also contained age restrictions for extension of visas.
The high court ruled that it was not open to the government to alter the terms and conditions of the old scheme and that there was no good reason why those already on the scheme should not enjoy its benefits as originally offered to them. Justice Sir George Newman, in his judgment, emphasised the aspect of “good administration and straightforward dealing with the public” and observed that “not to restrain the impact of the changes would give rise to conspicuous unfairness and an abuse of power”. Three cheers for fair British justice.
• Arrogant MPs and bold pilots: The Pilots Association should be congratulated for its bold stand against the unpunctual and arrogant Kerala MP P.V. Abdul Wahab. Air travellers are frequently put to unnecessary hardship because some VIPs do not bother to check in on time and, in the process, delay the departure of the flight. A Delhi-Bangalore flight did not take off for 20 minutes because of the late arrival of a VVIP, former PM H.D. Deve Gowda. As he came in to occupy his seat, I raised my voice and told him that he had inconvenienced 110 passengers. No regret was expressed, nor was any explanation offered. On the contrary, his looks indicated that I did not appreciate the heavy burden placed on our political leaders in discharge of their onerous public duties and that I was making an unnecessary fuss over an insignificant issue of delaying flights.
This is the mindset, the lal batti culture, which needs to be obliterated. Captain Rajat Rana was within his rights in ordering the Kerala MP off the plane. The MP’s entry into the cockpit was clearly unlawful and his abusive language deplorable. There should be no camaraderie between fellow MPs in such cases. The issue in the present case is not between individuals. It is of political arrogance and performance of duties by courageous officials.
Posted by B D Narayankar at Sunday, April 13, 2008