Anarchy haunts Nepal even after polls 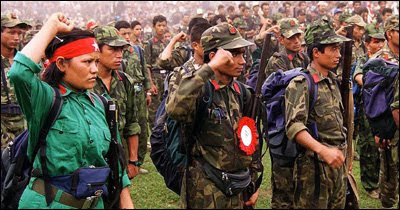 Yubaraj Ghimire writes for Indian Express
Today Nepal holds an election for its constituent assembly. The Communist Party of Nepal-Maoists (CPN-M) plunged into the democratic exercise, taking a calculated risk. It stands to gain already. People have accepted it as one of the important catalysts behind the election to the constituent assembly. It is also thought of as one of the major contributors towards Nepal’s likely journey — of republicanism and federalism.
But the Maoists are still not confident of getting the votes, which is why their militant young communist league cadres have fanned out in big numbers, mainly in what they call the Maoist base areas. These are areas where rival political leaders were forbidden from entering — something that the Election Commission failed to take into account effectively. This, political observers feel, is a guarantee that Maoists will have a respectable position or numbers in the constituent assembly. Ignoring and overlooking likely electoral malpractices is an apparent method to ensure that Nepal will have lasting peace and its own model of democracy.
Chief Election Commissioner Bhojraj Pokhrel has said repeatedly that after all an election is just an extension of the peace process, implying that rigorous implementation of the code of conduct and disqualification of those indulging in gross violation will derail the election, and by extension, the peace process.
As polling day arrives today, the people’s enthusiasm is heady. Prime Minister G. P. Koirala told international observers — about 1,000 of them — that all problems of the country would be over once the constituent assembly poll was over. This is a dream that the people of Nepal, of whom nearly 45 per cent are illiterate, and an almost equal number live under the poverty line, have bought. But many, including international observers and a majority of Nepal’s people understand that what Koirala is saying is neither true nor possible. This is where the Maoists sound different. Not only are they targeting the King as the cause of Nepal’s backwardness, but as the electioneering drew to a close, they began lumping the Nepali Congress and the Communist Party of Nepal-United Marxist Leninist (CPN-UML) as the allies of the king who were out to ‘annihilate us as terrorists’. Maoist Chief Prachanda’s message to the electorate everywhere he went was clear — let these parties apologise to us for having called us ‘terrorists for our pro-people fight’.
All these developments show that post-election challenges and political equations will not be easy to handle. As the country is poised for a hung constituent assembly scenario, the Maoist faction is almost certain to stake its claim to form the government on the sole plea that it is the only legitimate agent of change. G. P. Koirala, whose name is, almost synonymous with power, is equally certain to invoke the TINA factor in his favour. It is also equally predictable that India and the United States, the two major external players in Nepal’s politics, will not feel comfortable seeing someone in their security radar taking over as executive head of Nepal — a country that is so important for both of them strategically. And of course, equally challenging will be the course that King Gyanendra will adopt. Despite the constituent assembly being under directive from the interim house to enforce republicanism by its first meeting, it does not look feasible. The first sitting will basically see the Pro-tem speaker administering oath of office to the new members of the constituent assembly. But there will neither be a government to move the bill, nor will the rules of procedure of the house be defined. Similarly, the presence of pro-monarchy parliamentarians, mainly within the Congress and UML as well as other parties, would also will be crucial factors in deciding the issue.
Moreover, as the Maoists — key players in future governance — have put forward the idea of carving Nepal into ethnic provinces, the country is likely to get into a new phase of ethnic conflict All these developments only indicate that Nepal’s journey ahead is full of challenges. The constituent assembly poll will of course legitimise the prevailing chaos and anarchy, but there is no guarantee that it will help the country in dealing with uncertainties.
ghimire.yubaraj@gmail.com
Posted by B D Narayankar at Friday, April 11, 2008