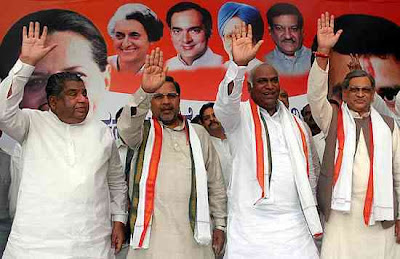 BANGALORE, May 17, 2008: With polling in both phases crossing a decent 60 percent, the chances of BJP's victory run appears to be more imminent. The party might just scrape through for a simple majority or even run short of it by couple of seats for a simple majority. Simple majority will be 113 seats and as per the exit polls at the end of the second phase the BJP is slated to get a total of 105-107 seats when the third phase ends on 22nd May. The calculations are done based on the history of voting pattern in the state the elections in 1999 that was when BJP started gaining prominence in state politics, and also the JDS had started devouring the vote share of Congress. The state was clearly divided into four zones namely Coastal belt which is dominated by BJP with interspersing of Congress, South and Central Karnataka which is a JDS dominated area-predominantly an area inhabited by Vokkaligas and the Northern Karnataka which is a Veerashaiva belt which is a hotbed of community based politics topped up with religious overtones.
The division is clearly seen in the last two elections in 1999 and 2004 and according to election watchers this division is going to be more prominent in the next phase considering the good polling percentage in the first two phases. The third phase constituencies are located in the Northern Karnataka where Congress is stronger and JDS has been gaining prominence of late due to the Vokkaliga-Veerashaiva understanding. According to sources in the Parties the Congress and JDS have entered into a secret pact to co-operate with each other in the third phase. The nature of co-operation will be based on the strength of both parties in the constituencies. Wherever the Congress is stronger the JDS will go slow to allow the Congress to win and the Congress will give tacit support to JDS wherever its own chances are weak in some constituencies. This device was basically designed to minimize the BJP in this phase. It is forgone conclusion that whenever the voting crosses 55 per cent the BJP stands to gain and in the last two phases the voting had been 68 per cent and 60 per cent respectively which means the BJP’s share has increased. It could be hypothetical, but the dynamics of politics cannot go wrong. It is also evident that in the third phase bigwigs like Dharm Singh, Mallikarjuna Kharge, H.K. Patil will be contesting and their victories will be a most prominent for the Congress while does not have much stakes except for few constituencies. The BJP is likely to strain every fibre in its structure to eke out that last bit of votes as its Chief Ministerial candidate B.S. Yeddyurappa is a Veerashaiva and has already mobilized support base for the party among the various Veerashaiva religious institutions like Mutts, educational institutions and other organizations.