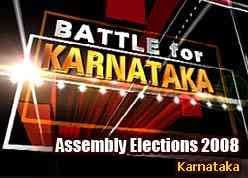 Amidst tight security arrangements polling had remained completely peaceful in this malnad town nestled amidst Western ghats. Almost every shop including pan shops, textile showrooms, grocery stores, garages and eateries remained closed. Only a few medical shops were seen opened. In every street corner people, who had returned from polling booths, stood in groups discussing the fate of the two former Chief Ministers.
In most places polling remained brisk since the 7am start and in villages like Isooru, Kalmane, Gama and Church Hundi 50 per cent of the voters had cast their franchise before 1pm. However, in the town itself, polling was not that brisk. When this correspondent spoke to the voters they opined that the two leaders, well known for their high egos, were in a neck-and-neck fight.

Shimoga district has given four Chief Ministers to the state and will it give the fifth this time? This will depend on the victory of Mr Yeddyurappa and of course BJP manages a majority on its own. Learning a bitter lesson after being unceremoniously dumped by JD(S) in November that led to the mid-term poll, BJP has vowed that if it does not get a majority on its own it would sit in the opposition benches.