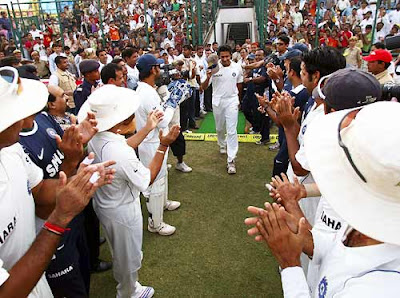 As the match headed towards an end, all focus shifted to a giant who carried all the adulations and criticism on his shoulders with right spirits. He always had been a true ambassodor of cricket. We are talking about a player who has been a great competitor and yet never overstepped the line of conduct. Anil Kumble, added a poignont note to the boring drawn match by announcing his retirement from international cricket.

Kumble's sudden announcement overshadowed Australia's brilliant fightback in the test after India thrashed them by 320 runs in the previous game to take a 1-0 lead in the four-match series.

Continuing with his form, VVS Laxman made yet another half-century (59 not out), after making an unbeaten double century in first innings of the third test of Border-Gavaskar series played at Feroz Shah Kotla stadium. Saurav Ganguly, alongside Laxman, remained unbeaten on 32 before Kumble declared India's second innings, leaving Australia to chase an improbable 245-runs target.

Early in the morning Sachin Tendulkar and Gautam Gambir provided resistence to the Australian attack which looked on the top after removing Rahul Dravid for 11.

Australian openers Mathew Hayden (16 no) and Simon Katich (14 no) played out eight overs to reach 31 for no loss before the match was called off. Fittingly enough, Kumble opened the bowling for the last time in his 19-years career at his favourite Kotla ground.

Kotla had been an happy hunting ground for Jumbo who picked up 58 wickets in seven Tests played here, and the most memorable performance being a 10-wicket haul against Pakistan.

In his illustrious career, he snapped 619 wickets in 132 tests playing for India. The last ball of his career was a full toss to Hayden who dispatched the ball straight to the fence.

The close of play brought emotional moments to the fore as members of the Indian cricket team - Zaheer Khan, Rahul Dravid and his successor Mahendra Singh Dhoni - carried Jumbo, taking a lap of farewell round Ferz Shah Kotla.

Australian bowlers bowled sharp spells to back skipper Ricky Ponting's field placements against a defensive-minded Indian batsmen as any mild hopes of a result ebbed away after lunch.

Brett Lee (2-48), Stuart Clark (1-22) and Mitchell Johnson (1-23) earlier put in dangerous spells, bending their backs in a last despairing effort to wrench a result from a pitch that did not deteriorate as both captains expected it would. However, Lee showed sparks of his old fire to return two for 48.


Allrounder Cameron White (1-23) was not employed by captain Ricky Ponting until the match had been virtually decided, but he bowled tidily when given the chance and dismissed Tendulkar for the second time in the series with a rare ball that turned.

The teams now travel to Nagpur for Thursday's final Test, with India holding a 1-0 lead.
Posted by B D Narayankar at Sunday, November 02, 2008