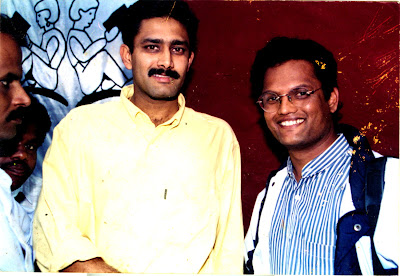 RENOWNED FOR his ten wicket haul in a Test innings against Pakistan in New Delhi in 1999, becoming only the second bowler to achieve the feat after Englishman Jim Laker; his best one-day performance was six for twelve against West Indies at the Eden Gardens in Kolkata during the Hero Cup tournament in 1993. He is the leading wicket-taker for India and the third highest in the world with 619 wickets from 132 tests and 337 from 271 one dayers.

Yes, we are talking about Anil Kumble, Jumbo as he was known in the cricket world, who hung his boots up on the final day’s play of the third Test of Border - Gavaskar trophy played at Feroz Shah Kotla.

Kumble had been a true ambassador of cricket. He certainly did not spin the ball as prodigiously as the great Aussie leggie Shane Warne did but he was a bowler of his own kind. He was famous for his nagging line and length and the lift he used to get on any pitch. He was more in Bhagwat Chandrashekhar’s mould.

Warne could be a great competitor and most aggressive spinners of all times, but Kumble too was not far behind. What is striking about Kumble is that he is a great ambassador of cricket. It was reflected in his 18-years-long international career when he only once pushed his way into the match referee’s room in the infamous Sydney Test. The one-liner statement which he made after the Test in a press conference defines what Jumbo is all about - he had said only one team was playing in the spirit of the game.

There had been a number of occasions when Warne had overstepped the code of conduct, but Kumble did not slide himself into that orbit. He never even passed banter, leave alone resorting to sledging. This quality of Jumbo certainly makes him bigger in the cricket world than Warne. Patience and perseverance are two of the most important elements for a spinner’s success and present abundantly in Kumble’s character.

His ability to raise the morale of the team especially when the chips are down played a pivotal role in some of the team’s notable performances. Who can forget the 2002 Test against West Indies at Antigua where Kumble came out to bowl with a broken jaw and heavily bandaged around the face or more recently the first Test of the Border - Gavaskar Trophy at Bangalore where after suffering a shoulder injury he came back to bowl just hours later, leaving everyone awe-struck. Further still, he took a catch running back of Mitchell Johnson, caring little for the 11 stitches on his left hand in the third Test at Feroz Shah Kotla stadium.

His workaholism was well drafted when he tirelessly bowled 72 overs in a Test innings against Sri Lanka at Premadasa stadium in Colombo, in 1997. In this inning Sri Lanka scored 952 runs in 271 overs in reply to India’s 537 in 167.3 overs and the match ended in a draw.

Kumble has broken numerous records in his nearly two decades long uncelebrated career. In 2001, he became the first Indian spinner to capture 300 wickets in Tests and went on to achieve the landmark in one-day cricket just a year later. Earlier this year, Kumble became the first Indian bowler and only the third in the world behind Muttiah Muralitharan and Shane Warne to take 600 wickets in Test matches. The icing on the cake came at The Oval as he put together a well crafted century, a feat which he later described as one of the most cherished moments of his life.

After Sunil Gavaskar, there came Sachin Tendulkar. After Kumble, there certainly is somebody waiting in the wings of his calibre to fill up the void. But sheer calibre and skills will not make him slide into Kumble’s shoes. The successor can only be so called when he plays cricket the way Jumbo played - a thorough gentleman. Let’s salute for the last time this ’silent assassin’ from Bangalore for laying down his gun.