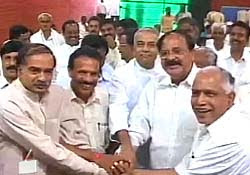 Bangalore, May 25, 2008: A preceding chapter to the Karnataka elections, contains a story of a steep rise and fall of politicians.
Here's a backgrounder
In 2004, Dharam Singh of the Congress became Chief Minister in a coalition with the Janata Dal (Secular) after the assembly elections gave no party a clear majority. 20 months later he quit after the JD(S) withdrew its support.
In 2006, after dispatching the Congress, Deve Gowda's son Kumaraswamy took over as Chief Minister, in an unlikely combination with the Bharatiya Janata Party (BJP). However, 20 months later he refused to hand over the post as agreed to the BJP and this coalition collapsed too.
In 2007, the BJP's first Chief Minister in south India, BS Yeddyurappa, was sworn in - believing he would finally get JD(S) support. But the Gowda family struck again, and he lasted all of one week.
So, as we see, delimitation has brought a renewed focus on Bangalore. The city now accounts for more than 10 per cent of all the seats in the state, ie, 28 out of 224. This is reflected in the manifestos of the major parties - who were earlier so keen to be seen as pro-rural that they even neglected urban development.
And so, Karnataka waits.