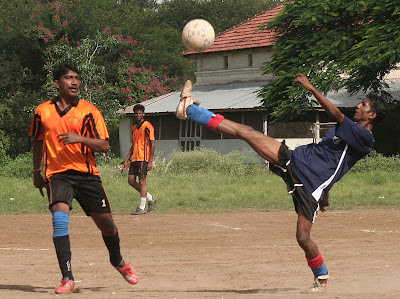 Vinay Katyal stole the thunder for Thunderkatz, scoring the all-important match-winner. He was a livewire on the field. Apart from setting up attacks, he was penetrating the opponent’s citadel with alarming regularity.

Vinay struck the decisive goal, slamming the ball past the diving goalkeeper in a spectacular fashion in the 10th minute. In the second half, the battle assumed exciting proportions as both teams weaved some fantastic counter-attacks.

They, however, failed to translate them into goals.In another match, Chetak ‘C’ edged out KP ‘B’ by a solitary goal. Ravi Daitankar found the target for Chetak in the 20th minute. Stallion Football Club also chalked up a 2-0 victory over Poona Socials ‘B’. Piyush Ingle and Akash Kudu bloated the net in the 24th and 27th minutes respectively.

In yet another match, Vilson’s Old Boys’ Association put it across Extreme Warriors 1-0 thanks to an exhilarating 6th minute goal from Ryan Godinho.