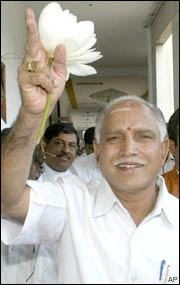 It was unkindest cut of all - Archbishop Barnard Moras of Bangalore berating and shouting at Karnataka Chief Minister B S Yediyurappa in full public glare. It was a strange and uncivilized behaviour which was unwarranted and unexpected from a Godman.

Compare his behaviour with that of other Hindu leaders, who have not misbehaved with government authorities, inspite of end number of provocations on Hindus in Andhra Pradesh, Kerala, Tamil Nadu, Assam and Jammu and Kashmir, where Hindus suffered huge losses and even made to flee.

Why did Barnard Moras behave in an ungainly manner? What was the necessity to blurt out in front of TV cameras? Was it a political stunt? Probably, he wanted to show the world that Christians were being attacked in BJP-ruled states. He hardly gave a thought that the outburst against Christians was the result of provocation coming from evangelists, who distributed blasphemous literature, deriding Hindu gods.

Christians, instead of leveling charges against BJP-ruled government, should be thankful to Yediyurappa for not allowing law and order situation going out of hand. Other than isolated incidents of localized vandalism in which both Christians and Hindus were involved, there was not a single instance of organized violence in Karnataka. The CM also has shown enough courage to initiate an investigation into conversion activities perpetrated by evangelists, instead of succumbing to the tirades launched by evangelist-owned news channels.

Historically, evangelical churches were the branches of foreign governments that incited colonial wars against Hindus for centuries. Virtually every major European country had justified wars of colonial conquest as a prelude to loot and genocide in the name of Christianity as any moderately well informed observer will acknowledge.

To unmake the ignominy faced by losing direct control over India in 1947, the evangelists are doing everything on this earth to regain control. In fact, they are running the Indian Union with the heinous support of airhead human rights organizations and television channels. The evangelists are on a mission to seek India's political transformation through conversions. Conversion is a means to blunt the possible revolt of Indians on matters such as Hinduism and Hindu culture.

The evangelists are working towards creating a docile native constituency through conversions that will oblige to the wishes of powerful Christian nations - America, UK and Rome among others. There is nothing saintly about it, it simply is demoniac pretensions to subvert Hinduism and subjugate Hindus. That some educated and well-connected Indians support their activities only means that traitors exist and should be treated as such.

India is known for its spiritualism and religiosity, and the evangelists are aiming to sabotage this very facade that has made this country unique and a nation to look up to at times of moral crisis. Unfortunately, the pseudo-secularist parties, instead of curbing these provocative activities, grab any chance coming their way to sympathize with minorities for votes.

Look at the DMK and CPM, who never are tired castigating BJP for not protecting minorities, whereas, comparatively speaking, instances of Christian and their churches being attacked, are more in Tamil Nadu and Kerala. In fact, the BJP record in maintaining inter-religious harmony is much better than any other so-called pro-minority parties. Sensible sections of the minorities acknowledge this.

So, in this context what should be the way out to tackle religious subversions? Should the defense of India imitate Joseph Stalin’s ruthless, unforgiving campaign against the Nazi attempt to wipe out Russia and its Slavic people? Stalin had executed dissenters and collaborators without pity and eventually crushed the Nazis in epic struggles without parallel in recorded history. This has to be debated.
Posted by B D Narayankar at Thursday, October 02, 2008