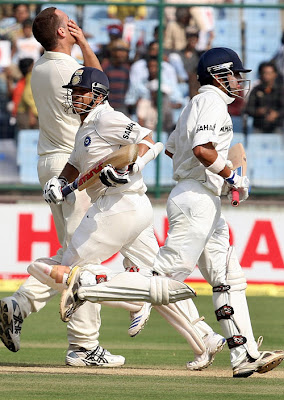 After losing Nawab of Najafgarh Virendra Sehwag and formidable Rahul Dravid early in the day, Indian batting maestro Sachin Tendulkar and Delhi lad Gautam Gambhir poured water over the hopes of Aussies building on the early advantage on the first day of the third Border-Gavaskar Test match being played at Feroz Shah Kotla stadium in Delhi on October 29.

The defining moments of the day were the two wonderful partnerships between Gambhir and Tendulkar (130 runs) and then between Gambhir and VVS Laxman (an unbeaten 139-runs stand). Especially Gambhir's stand with Tendulkar mattered the most as India was precariously placed at 27 for 2 in the 11th over after the Aussies sent back two of India's top guns packing for cheap scores. First, Brett Lee trapped Sehwag plumb when the opener tried to defend from the crease. Next, Dravid edged Mitchell Johnson to Mathew Hayden in the slips, who took a good low catch. Dravid tried reaching a fuller-length ball angling away from him.

Right from the start of the series, the Aussies have had few causes for concern. After the retirement of Glen MacGrath and Shane Warne, their attack looks toothless. It will not be wrong to say here that Lee looks spineless without the support of MacGrath and Warne from the other end. Mitchell Johnson and Stuart Clark failed to learn a lesson from Zaheer Khan and Ishant Sharma, who picked wickets with swing in Mohali and Bangalore tests.

The other concern of the Aussies includes the absence of an attacking spinner and the dogged concentration of Indian batsmen. It was a very familiar list of troubles.

It was a day of reckoning for Gambhir. This was his back-to-back test centuries against the No. 1 Test team in the world. Gambhir cracked a scintillating unbeaten 149 runs. Gambhir played a waiting game after losing Sehwag and Dravid. The southpaw, in association with Tendulkar, rebuilt the Indian innings by playing a waiting game.

When the platform was safely built, Gambhir changed gears and started striking the ball with exquisite timing and and placement. He began to clip balls through the leg side and cut and drove through the off side. No wonder he brought his classy century with an unexpected six of Shane Watson.

The runs did not stop there. Laxman was almost unnoticed, inasmuch as that can be said of his glorious flicks through leg, in building a valuable half-century that helped stop any momentum Australia might have collected when Tendulkar departed. Laxman and Gambhir's unbeaten 139-run partnership became a major frustration for Aussie captain Ricky Ponting, whose troops performed admirably at times but failed to maintain the pressure.

India started the second session at a menacing pace. Both Tendulkar and Gambhir hitting boundaries all over the park. Tendulkar reached his 51st Test half-century with a boundary off Stuart Clark and Gambhir followed suit. Just before tea, Tendulkar was done in by Johnson's persistent line when the maestro played away from his body and nicked an angling delivery into the hands of Australian wicketkeeper Brad Haddin for a well-made 68. Tendulkar had gone into the shell as he was playing for tea.

At stumps, India is sitting pretty with 296 for 3 on the board. When Gambhir and Laxman will take guard tommorrow, the former would like to build on his unbeaten 149 runs and the latter look forward to end his drought. Will Ponting have a plan up his sleeves? We will find out tomorrow.
Posted by B D Narayankar at Wednesday, October 29, 2008