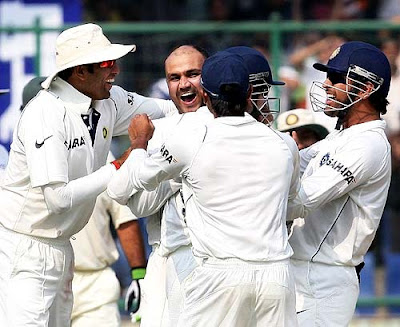 It was a gripping day of cricket. The Indians bowled their hearts out and there were edges flying all over the places. Skipper Anil Kumble failed to place an attacking field, which otherwise would have fetched some more wickets on the third day of the the third test match of the Border-Gavaskar trophy played at Feroz Shah Kotla stadium in Delhi on October 31.

The Australians on the other hand, never really dominated the proceedings, but did not give away too many wickets, which led them to script a sort of a fightback from the blades of opener Mathew Hayden and skipper Ricky Ponting.

The good thing for India, however, is that when they come out tommorow to play, their bowlers would find the ball still new and hard. Quickies Ishant Sharma and Zaheer Khan could think using the morning condition to India's advantage. As far as the spinners are concerned, they can make a huge difference. Leggies Amit Mishra and Kumble and offie Virendra Sehwag are getting a lot of rip. Particulary Sehwag who picked up three vital wickets.

If Kumble gets it right tommorow by placing an attacking field and gets early breakthroughs, it will open the floodgates for India to sniff out the Aussies out of the match.

The tourists were happy with way things went for them in the first session of the fourth day. They scored hundred runs having lost one wicket. Hayden and Simon Katich batted in a gritty manner and looked comfortable.

Zaheer, who started the proceedings, bowled two bouncers at Hayden, but failed to get the much-needed breakthrough for India.

Katich looked in good knick and played some fluent shots, hitting 10 fours and notching up his 10th Test fifty in the process. He smashed Sharma thrice over the ropes and looked relaxed against Jumbo.

After lunch, Katich was undone by Mishra who lured him into playing a flick from outside the off stump and then watched as the ball sneaked through the gap and knocked off the middle stump. He made 64 runs with ten hit to the fence.

Before tea, India tasted another Aussie blood when Sehwag pushed one quicker through the air to trap dangerous-looking Hayden leg before for 83. The innings was studded with 13 boundaries and a huge six. It was Hayden's highest score in the series so far. He also shared 123 runs for the
opening wicket with Katich and another 79 with Ponting to lay the platform for Australia's reply to India's mammoth 613-7 declared.

Ponting hit 14 fours in his fine 163-ball 87-runs knock and shared a vital 82-run stand with the in-form Mike Hussey.

The Australian skipper looked set for his 37th ton following his 123 in the drawn Bangalore opener but was bowled by Sehwag, who gave away just 66 runs picking up three vital wickets off his impressive 22 overs.

Hussey was picked up by Sehwag, giving him his third wicket of the match. The local lad tossed the ball up on the middle and leg of the southpaw who failed to cover his off stop. Hussey made a useful 53 of 146 balls belting seven boundaries.

Michael Clarke was batting on 21 with Shane Watson on four at close after surviving some close chances against the spinners, who managed to extract good turn from the track.
Posted by B D Narayankar at Friday, October 31, 2008