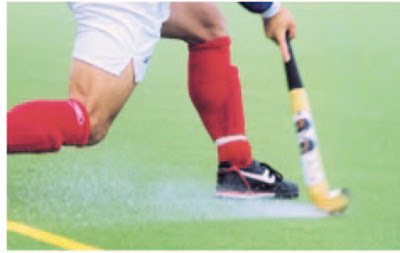 PUNE: A motley, but vociferous crowd had to be satisfied with two goal-less draws in the first-leg semifinals of the Rosary Education Group Nine-a-Side Hockey Tournament played at Ammunition Factory Ground on Monday.

Amidst all the barrenness, there were some players who delighted the crowds with their superb tackling skills and control over the ball to set up attacks for their teams.

One such and perhaps the best today was Shoaib Ansari of Metro Sports. Delightful in his stick work, he played to the gallery. He was a treat to watch barging into Vikram Pillay circle thrice with lightning speed, drilling holes in the defense with dexterous dribbling abilities.

Perhaps Shoaib should have been remembered more if Metro forwards who neither could trap his passes nor cover ground to launch an attack capitalized his moves.

The game, however, is not played with one individual. VPA were good as a team. They dominated possession in the entire first half.

VPA missed the best opportunity to coast past the rivals in third minute of the first half when Cyril Bernard and Vikas Pillay had a couple of exchanges on the left flank in the circle, but Vikas dragged-flicked the ball outside, losing control over the ball.

In 13th minute, VPA made a wonderful move through Vikas who struck a shot that deflected of goalkeeper Sunil Saket’s pads to Cyril, who rushed into the centre of the circle, dodging a couple of defenders before feeding it to Vikas who failed to convert.

Metro Sports dumped their performance of the first half and played calculated hockey. They clearly appeared a team on the rampage.

Metro lost an opportunity in the seventh minute of the second half when Shoaib broke into the defense giving a pass to Sunil Waghmare who failed to capitalize.

But for Railway Police’s second minute opportunity, they looked off-colour in the first half.

In the fourth minute immediately, city police managed to earn a penalty corner, but a magnificent save from Railway Police defender Amar Kadam spoiled their celebration.

In the seventh minute too, Poona Police could not convert the penalty corner through Vinod Nimbore.

The second half also was no way different for both teams, the match ending into a draw.

There is going to be a Blogcamp in India on 16th of June. Around 250 bloggers will be taking part in the event.

This is what they say on their blog: "The way unconferences work is that, you don't have an agenda, rather we will put up a white board, where participants will themselves add the topics they are interested to speak upon. Depending upon the number of speakers we will go for multiple threads. There will be some intense discussions, we will have a lot of fun and yes there will be blogging, video blogging, photo blogging, podcasting ... everything under the blogger sun."

The registrations have started. We are planning to have 250 participants from all over the country. There are some people taking part virtually, using youtube, slideshare, skype etc. if you are interested please add your name to the wiki.